skip to main | skip to sidebar

Still on hiatus here, but...

...I'm assuming some people are still finding me through here first. If so, here's some links of interest for you if you care to continue stalking me for my body:

MyLifeComics: This is where I post my daily journal comic, which details the minute and mundane moments of my life, as well as the crazyfuntimes. Yes, that's one word.

Fortuitous Twist: My relationship drama webcomic set in New Jersey and revolving around sushi antics and kitty cats. It is slowgoing, but still going. I have big plans for it; I just need to find the time to sit down and work on it.

DeviantART Paulwise: Here's my DeviantART page, where I'm meticulously adding artwork to my gallery, as well as sketches and silly things.

I'm sure you can find me on a bajillion other websites, but those are the big ones for now. Enjoy...
Posted by Paul Abbamondi at 6:45 AM 1 comment:

I've come to discover that I really and wholly do not enjoy writing about writing. It always felt like a chore or that I was just being a writerly sheep, baa baa baa-ing along with everybody else. So I'm stopping for now. Well, I'm not gonna stop writing, but you get what I'm saying. Right?

Anyways, thanks for those that did read me here and took the time to comment. Much appreciated.

I will be continuing to post my journal comic at MyLifeComics five days a week, and if there is any new writing news (e.g., a story sold or was just published or I secretly discovered that every editor in the world hates me) you'll learn about it there for sure. Plus, maybe some book reviews now and then. No promises, but you never know with me...

So, until later! Or maybe never again!

EDIT: Frak you, Blogger! What is this "scheduled post" crap? It's taking me forever to get this thing live. Ugh, glad I'm leaving...
Posted by Paul Abbamondi at 9:00 PM 1 comment:

I kind of hate you at the moment. And blogging. It is draining me. Blog blog blog blogblgobgoblgoblgbogbgoblgoblog. So I'm taking a break.

See you on the flipside, blog.

My review of City Slab #12 is now live at The Fix Online. Go on, check it out.

I worked on artsy stuff for most of the weekend. Got some comics done for the ones for The Stars Down Under, as well as MyLifeComics. I even doodled! It's been ages since I just sat and...doodled!

Today I went to the park for the first time in many months. To say it was divine would not even come close to describing the experience.

I still plan on submitting a story to the new open submissions period for Sword and Sorceress, but I started another piece for the time being. Sci-fi and about food. Everyone knows I'm a foodwhore. So, yeah, I'm working on this one for a bit.

And lastly, Battlestar Galactica has been great so far. I only wish it was back on Sunday nights.

There you go. Five random things makes an entry.
Posted by Paul Abbamondi at 7:00 PM 3 comments: 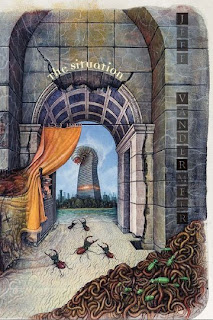 #13. The Situation by Jeff VanderMeer

This is, in short, weirdly fascinating. It's also not really a book, but rather a novelette packaged like one so for the sake of my sanity I'm just going to count it here among the others. The Situation is the story of an office's innards and its quirky employees, an account of a place both strikingly different than what we might know and yet all-too-familiar to those that have spent time in a gray-walled cube slaving over market reports and the like. It is the journey of an unnamed protagonist who has just been put in charge of a new project--to create a ginormous fish, from scratch, big enough that it can swallow a child whole. But of course.

Can I admit something here? Yes? Okay, I will then. All of this reminded me somewhat fondly of that scene in Beetlejuice where Adam and Barbara end up finding out that the afterlife is merely a convoluted office setting, brimming with paperwork and monotony. Of course, the characters there were monstrous, sure, but also comical. Here, where our leading worker's fellow employees are shapeshifters, things are less laughable. In fact, they are very much subverted, making them both unclear and interesting. My favorite would have to the Mord, once simply known as Mord, a bird lover who quickly mutates into something more quietly menacing, and all within an office's walls.

Which is really why I think I liked this the most. It's the mix of normalcy and surrealism, the juxtaposition of paperwork and info-seeking beetles, the horror of a manager made completely of ignitable paper, the way isolation creeps in just as hauntingly as it would in any situation. There's a sense of loss, a sense of confusion, an understanding that everyone hates you, and finally for our working friend a chance to break away. It's not exactly how he'd have liked to go (it involves a slug, and for those paying attention earlier on they know exactly what this means--serious business), but it is an end fit for a nobody worker bee.

The Situation is available as a free download from Wired. Click here to check it out.
Posted by Paul Abbamondi at 10:01 AM 2 comments:

Just saw that the cover for Kaleidotrope #4, which contains my short story "She's a Hearth", is now up:

As a fan of pipes and robots, I must say that I approve. What do you think?
Posted by Paul Abbamondi at 1:30 PM 2 comments:

Feeling the urge to get better in touch with nature, Bill Bryson, after spending some twenty plus years in Great Britain, decides to walk what many see as not walkable: the Appalachian Trail. It is a stretch of path that goes on for 2,100 miles, from Maine to Georgia, and is brimming with trees, bears, and history. Joining him on the trek is his pal Katz, a man who at first seems incapable of walking the length of a shopping mall. The two of them quickly discover that the AT is not what they were expecting. It has its ups and downs, its quirks and faults, and its Mary Ellens.

While some of the minute details of A Walk in the Woods had my eyes glazing over, the wit and charm of Bryson and his observations were more than enough to keep me turning the pages. Now, he most certainly does not walk from Maine to Georgia, but he is more than successful in getting himself back to man's roots. And small victories, in the grand scheme of Mother Nature, are much more acceptable.

Parts of the narrative hit home, especially since I have some strangely fond memories of a walk I once took with my parents, father at the ship's wheel, where Sunfish Pond was "only a little further" away. It's easy to see how Bryson and Katz grew quiet or agitated on the AT, how in all that beauty a little madness can still grow.

So yeah, a fun read, though sometimes thick on the details. Especially enjoyable for fans of the outdoors. A final warning: the cover is misleading.
Posted by Paul Abbamondi at 7:56 PM 6 comments:

Well, here's the TOC for the fourth issue of Kaleidotrope, which looks like it'll be coming out shortly:

Poetry
"Househunting on Mars" by Bonita Kale
"Praise for What I Don’t Know" by Thomas Zimmerman
"Cracked Shells" by Beth Langford
"Spring in the Lab" by Alyce Wilson
"Farm School" by Marcie Lynn Tentchoff
"A Manual For Good Housekeeping in the Age of Global Warming" by Miranda Gaw
"Ivanikha" by Dana Koster
Two Poems by Franz K. Baskett
"Worldviews on a Desert Trail" by Jason Huskey
"Towards the Afterlife" by Aurelio Rico Lopez III

Bonus Shtuff
"Who Goes There," Betty Ragan's interview with Marc Schuster and Tom Powers
"The Rise of the Fembots: A Brief Introduction to Female Android Sexuality in Film" by Eric Borer

I recognize some names up there. Do you?
Posted by Paul Abbamondi at 7:08 PM No comments:

Paul Abbamondi
New Jersey, United States
I'm a speculative fiction writer who reads and owns way too many books. I'm also a reviewer, an editor, and a world-famous circus entertainer. Well, two out of three isn't so bad.